The museum of rural population life of the Central Vltava Region 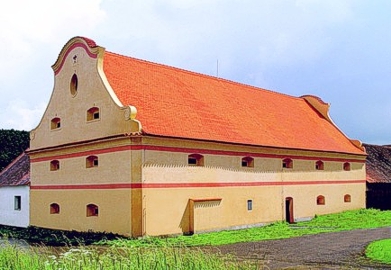 But the history of the settlements within the environs of Nový Knín is much older. We can learn about this in the section of the exhibition which is devoted to archeology. The oldest finds from the area of Hrazany come from the late paeleolitic-mesolitic era (some 11000–6000 years B. C.). The newer finds from the Kozí Hory region date from the mesolitic and the neolitic eras (10000 to 5 000 years B. C.). The region here was colonised for the first time in the 3rd millenium. The colonisers were the people of the Chamish culture. This is evidenced by finds from the areas of the villages of Nalžovické Podhájí and Čím. A burial place from the bronze era is located near Záporná Lhota. It dates from the 12th–9th century B. C. A cremation burial place from the 6th century B. C., which was discovered near Starý Knín, dates from the older Iron Age. Several other localities from the younger Iron Age were discovered in this area. The most well-known of these is the Celtic oppidum Hrazany. This oppidum is the culmination of the settlement in this area in ancient times. A newly-opened archeological exhibition is devoted to the Hrazany oppidum. From the 9th to the 10th century, the Vltava Region was colonised more extensively. The process of colonisation culminated between 13th and the 15th century. The latest major change in the levels of settlement in the region took place in connection with the construction of the Vltava dam cascade in the course of the 20th century. 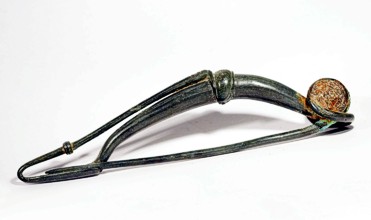 The Barn Museum in the Village of Prostřední Lhota (a branch of the Mining Museum Příbram) is located in a monumental four story Baroque building from 1770. The local farm was owned by the Order of the Knights of the Cross with A Red Star. The barn is now a protected building. Its foundations have the shape of a rectangle with rounded corners. The building is adorned with a belt cornice and small rectangle windows functioning as air vents. The rectangular windows are placed in the longer walls of the building. The shorter walls are formed by volute gables ending in a wavy cornice. The barn is one of the most valuable farming objects from the Baroque period to be found in the rural environment in the southern part of Central Bohemia.

It was due to the initiative of the village of Chotilsko that the spacious and architectonically interesting interior of the barn came to be used as an exhibition area and as a site for other cultural activities. An exhibition entitled “From the life of the rural inhabitants of the Central Vltava Region” was opened in 2004. It is the aim of this exhibition using period objects especially farming machines and instruments, household implements and craftsmen's tools, as well as the furnishings of the interiors of country dwellings, to document the economic activity and the life of the farmers working on the farms in the Central Vltava Region between the second half of the 19th century and first third of the 20th century. It is also the aim of the exhibition to document the main ways of securing livelihood by the local population whose basic characteristics survived until the middle of the 20th century.

The exhibition also shows that even after more than forty years of the socialisation of the Czech agriculture under the communist regime, the individual farmsteads retained a considerable number of large farming machines as well as smaller agricultural implements and objects which were used in the traditional country households. Some of the objects gathered together in this exhibition have been collected from the inhabitants of the villages of Chotělsko, Prostřední Lhota, Smilovice and from other areas in the vicinity of Nový Knín and Dobříš. The exhibition is a continuation of the collection of agricultural machines and implements which has been created in the Museum of Country Buildings of the Central Vltava Region in Vysoký Chlumec in 1999. It is also a continuation of an exhibition of crafts and industry in the Nový Knín Museum of Gold (a branch of the Mining Museum Příbram).

The spacious barn houses several other interesting exhibitions. Amongst these are an exhibition about the impact of the Order of the Knights of the Cross with A Red Star in Central Bohemia with emphasis on the Nový Knín region and an exhibition about the history of road motorcycle races. The motorcycle exhibition features examples of historical motorcycles owned by local people. There are a number of period photographs and also a number of awards. A photo exhibition documenting the life in the villages and communities and on individual farmsteads in the region of Vltava in olden times is also well worth seeing. Especially significant is the reconstruction of the interior of a country inn. Temporary exhibitions complement what is on offer in this museum.

The mining of precious stones in the past has strongly impacted the area in the vicinity of the village of Prostřední Lhota where the Baroque museum barn is located. Especially in the 16th century gold ore was mined in the area of Psí hory and elsewhere. The gold mining site was located on the left bank of the river Vltava some one and a half miles down from the Smilovice village. The gold mining site continued from here further towards the west where it touched the villages of Čelina, Mokrsko and Prostřední Lhota. A gold ore mill and a mining smithy stood on the nearby Čelinský brook. The local mining industry was managed by royal officials located in the town of Nový Knín. All these facts form part of the rich history of this picturesque region about what the visitor can learn in the Prostřední Lhota barn museum.