The Tour Site A "The Ševčin Mine" starts in the entrance building, which formerly housed deposits of extracted minerals. The entrance building features the exhibition "Traditional crafts and industries in the Příbram area". You can also visit the permanent exhibition "Mining and Metallurgy Buildings featured in Period Photographs". 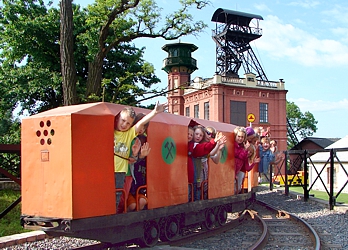 The exhibition features information about the social, economic and cultural developments in the area from the Middle Ages until the 20th century. These developments were strongly influenced by mining and metallurgy, as well as by traditional local crafts (candle making, wood carving, Christmas crib carving, rosary making, ring-making and the production of fairground fancy goods). All these crafts were connected with the existence of Svatá Hora in the vicinity. Svatá Hora, an architectural jewel of the Czech Baroque period, is one of the most important religious pilgrimage sites in Europe. It is devoted to the Virgin Mary. A number of exhibits in the entrance exhibition of the Mining Museum are related to this cult.

The registry building, which was constructed in 1880, houses the exhibition entitled "The History of Mining in the Příbram area". This exhibition documents the history of mining and metallurgy from prehistoric times to the termination of extraction work at the end of the 20th century. The visitor will learn about the almost one-thousand-year-long history of mining silver ore and, after the communist takeover of 1948, of uranium ore. Prehistoric documents providing evidence about the beginning of mining in ancient times, bronze objects from the times of the Celtic civilization, the oldest period document affirming the existence of the town of Příbram, dating from 1216, and the first written document about local mines and the local iron and steel works dating from 1311 are the most valuable items in this exhibition. The exhibition also contains examples of medieval and modern mining working tools and mining uniforms. The exhibition also features information about the well-known local mining school, which was founded in Příbram in 1849. There are also documents about the local mining academy and the local mining university. Documents about the largest global mining catastrophe of the time, which occurred in the Maria Shaft in 1892, are also noteworthy. 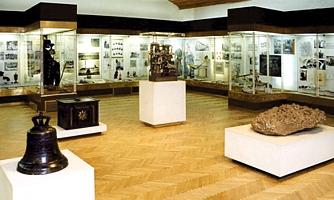 The visitor can look at documentation relating to the former communist state enterprises Rudné doly Příbram and Uranové doly Příbram. The exhibition features equipment used for ore extraction, as well as measurement and rescue technology. There are also samples of silver, lead and uranium ores. This part of the exhibition includes information about the infamous period of uranium mining in Příbram when political prisoners were illegally forced to work in the mines after the communist takeover of power in 1948.

The above exposition is thematically linked with three permanent exhibitions entitled "The development of vertical mining transport in the Příbram area", "Drilling equipment in Příbram mines" and "A panorama of the Březové Hory mining district". These exhibitions are housed in the attractive, authentic setting of the Ševčin Shaft, where the visitor can see the mouth of a pit with a mining cage. It has been proposed that the 1879 shaft tower, which was constructed in the style of 19th century (Malakov) industrial architecture, should be included in the UNESCO list of technical historical sights, due to its historic and architectural value. The visitor can also enjoy a unique view of the Příbram surroundings from the top of the Ševčin tower, which is 37 m (120 feet) high. 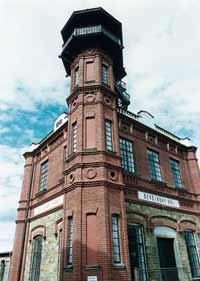 A valuable Czechoslovak-made compressor from 1928, which was used in the Březové Hory mining district, can be seen in the engine room of the Ševčin Mine. And an exhibition entitled "The World Significance of the Březové Hory Mining District in the 19th century," shows that 90 % of all silver and lead extracted in Austria-Hungary was mined here at the end of the 19th century! 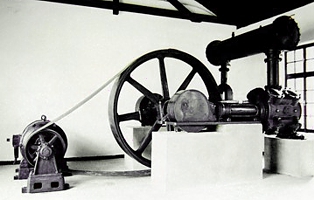 A fire engine from 1885, which used to be owned by the Příbram Mining and Metallurgical Headquarters and which was manufactured by by F. Smekal, Prague - Smíchov, is an important item featured in the Ševčín Mine engineering room. The fire engine was donated to the Příbram Mining Museum by Zdeněk Tůma and Václav Máša from Dobříš in 2006. 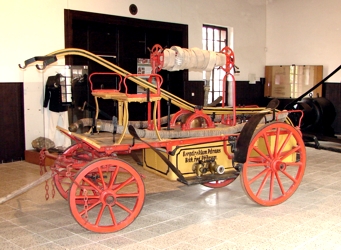 The former administrative building of the Ševčin Shaft, which was built in 1885, houses several thematically-related exposition units containing valuable mineralogical and geological samples from the Březové Hory district. The most important amongst these is a collection of silver minerals. The collection also includes miners' working tools, tallow and oil lamps, luxury miners' sticks (“Švancars”), which were used on special occasions, as well as home-made models of shafts – so-called Stufenwerke. There is also a permanent themed exhibition focussed on the paleontology of the Příbram area. 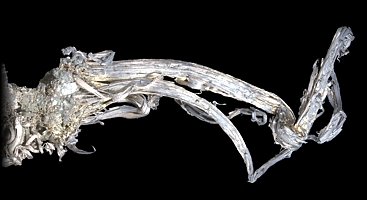 The slag heap of the Ševčin Shaft features an unusual exposition project. Mining machinery used in the Příbram mines in the second half of the 20th century has been installed on more than 180 m (230 feet) of railtracks. The visitor can also see replicas of a historical mining treadmill, a winch and a bell tower. The building of a museum of mining machinery would not have been possible without the help of the former Rudné doly Příbram state enterprise, which is now known as DIAMO, state enterprise.

A mining train operates from the Ševčin Mine courtyard in the direction of the Vojtěch Mine along a 230 m (750 feet) -long rail track. This unique technical curiosity, which attracts children and adults alike, is a partial reconstruction of a historic train track which existed here in 1884 and was used for the transport of silver and lead ore from the Ševčín mine area to the Vojtěch Mine processing plant. The train ride will transport the visitor back more than a hundred years. It also offers unusual views of the beautiful panorama of the Brdy Hills. 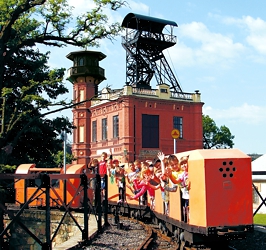 The visitor can also see an original miners' cottage, built in the 17th century. The cottage features an exhibition of the family life of miners in the 19th and 20th centuries. There is also an exhibition of folk puppetry and toy making, painted furniture and historical tools. The miners’ cottage is located about 300 yards from the Ševčin Mine in Havířská Street 105.

The visitor can also visit the Drkolnov Mine (originally called the August Mine), which was opened in 1836. A huge water wheel some forty feet (12,4 m) in diameter is a technical monument of international significance. The water wheel was an integral part of a complex of hydraulic works (reservoirs, ditches, drainage, inlet and waste water tunnels, water wheel chambers, water wheels). The Drkolnov water wheel was put into operation around 1850. It pumped water from the underground using an ingenious water traction system (before the introduction of steam propulsion) until 1899. The original wooden wheel was replaced with an iron wheel in the 1890s. From that time, until 1961, the wheel was used to pump drinking water for the whole city of Příbram. In 2000–2003, the conservation and the restoration of the water wheel took place while the underground spaces were adapted and made accessible for sightseeing. A ride down the 51 m (170 feet) long slide into the underground mine is a unique experience for both children and adults (depending on weather conditions).

At the end of your visit to Tour site A you can collect mineralogical and geological samples on the Ševčin Shaft slag heap. The slag heap comes from the Lill Mine and it dates from 1857. 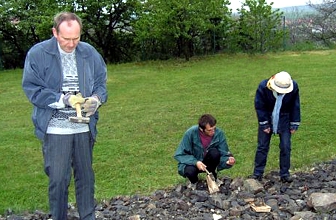