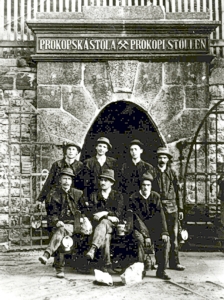 The Prokop Adit belongs to the most popular tourist attractions of the Mining Museum in Příbram and of the town of Příbram as well. It is because of the mining little train which takes the visitors of the museum to the deepest pit of the Březové Hory Mining District - the Prokop Pit, 1 600 m deep. It was started to be excavated in 1832 close to the former mediaeval pit. The Prokop Adit was opened before 1857 and it served for raw ore haulage. It was altered in 1891 - 1893, in 1957 and in 1998 - 1999. It leads, as mentioned above, from the Prokop Pit to the forecourt of the Anna (Ann) Shaft and was used for transporting raw ore to the local dressing plant. It is 217 m long and when counting so called 'by pass line' around the pit it measures 260 m. 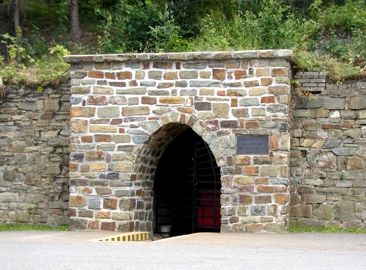 Within the tour the visitors can see the excavation of the Prokop Pit which is floodlit with lights and represents the deepest hole in the mining district and one of the deepest in Middle Europe. It is 1 597.6 m deep and has 41 levels. Historical working places in the chimney and at the cross cut with the marks of manual drilling dated from 19th century are on the show as well. This historical, horizontal mining output is connected through the underground corridor with the registration room of the Anna (Ann) Shaft and also with the Anna (Ann) Water Adit which was driven at the end of the 18th century. The visitors can use it to get to the nearby Vojtěch (Adalbert) Shaft. 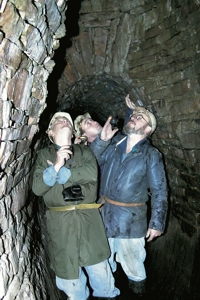